All about Porky Pig! 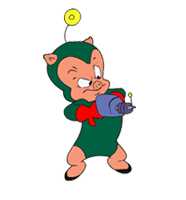 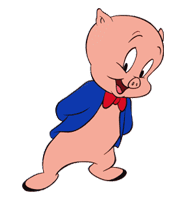 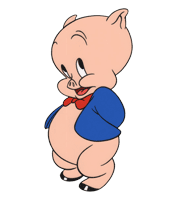 Who is Porky Pig? As Warner Bros. very first cartoon star, Porky was originally created by Friz Freleng, then revamped by Chuck Jones and turned into a character actor. Porky’s comedy relief characterizations can be seen in such hits as Dripalong Daffy, Duck Dodgers in the 24 1/2 Century and Robin Hood Daffy.

If you are looking for quick and dirty details about our friendly cartoon character Bugs Bunny, then look no futher. Check out the quick details below:

Porky Pig is structured almost identically to Elmer Fudd except for his nose, but the pair’s personalities are quite different. The early Porky had about as much personality as a can of Crisco. We didn’t know what he was, so he could hardly know who he was, and he just walked through his roles. I began to discover Porky’s unique character only when I gave him more sophisticated parts, and then he developed characteristics of his own.

As the space cadet in Duck Dodgers in the 24 1/2 Century or Friar Tuck in Robin Hood Daffy, Porky is the observer, stating what the audience is thinking and only incidentally playing an active part in the plot. Porky the observer was a type of character I had not met before. The role became significant in Duck Dodgers, in which he acts as Daffy’s assistant. The film’s leading man could not appear heroic unless he had somebody to bounce off of, and a character such as Daffy required someone relatively meek for the role. Porky, responding on behalf of the audience, makes us realize the true craziness of what we are seeing. – Chuck Jones 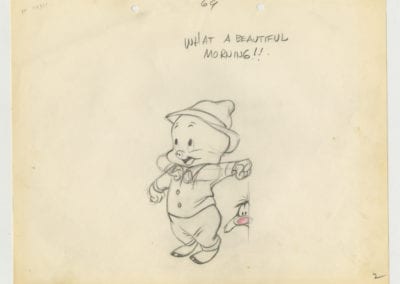 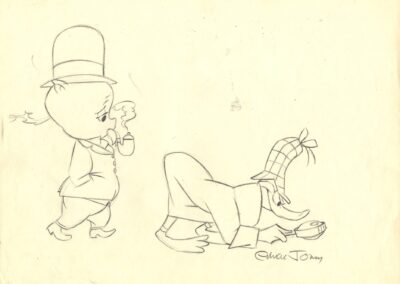 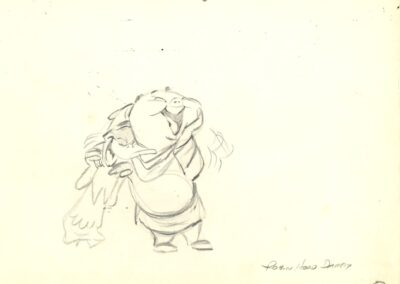 You read that correct! If you are a collector and you love Porky Pig, you can find the best orignal and certified art work to hang on your favorite character wall! Look at all the options below and as always, ask us any questions!

We know you love Porky Pig! We can’t live without him! That is why you want to grab your favorite hat, apparel, cup, and more at the Amazon store dedicated to our friendly Pig character Porky Pig!

If you are looking for Porky Pig images that are special to us, then look at our Porky Pig image collection below. Let us know if you have any favorites you would like to share! 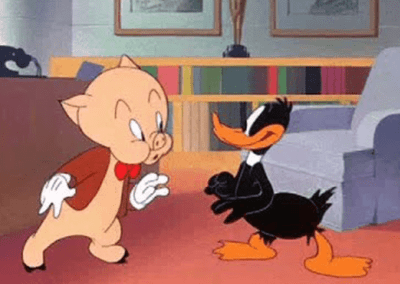 Getting Porky Pig to your screen at home is as easy as signing up! Click the image below to get started on the funnest plan for you and your kids (and grandkids) to enjoy Porky Pig at his best! You will be laughing all day long with the things he says that get stuck in your head. Click below to have super fun: