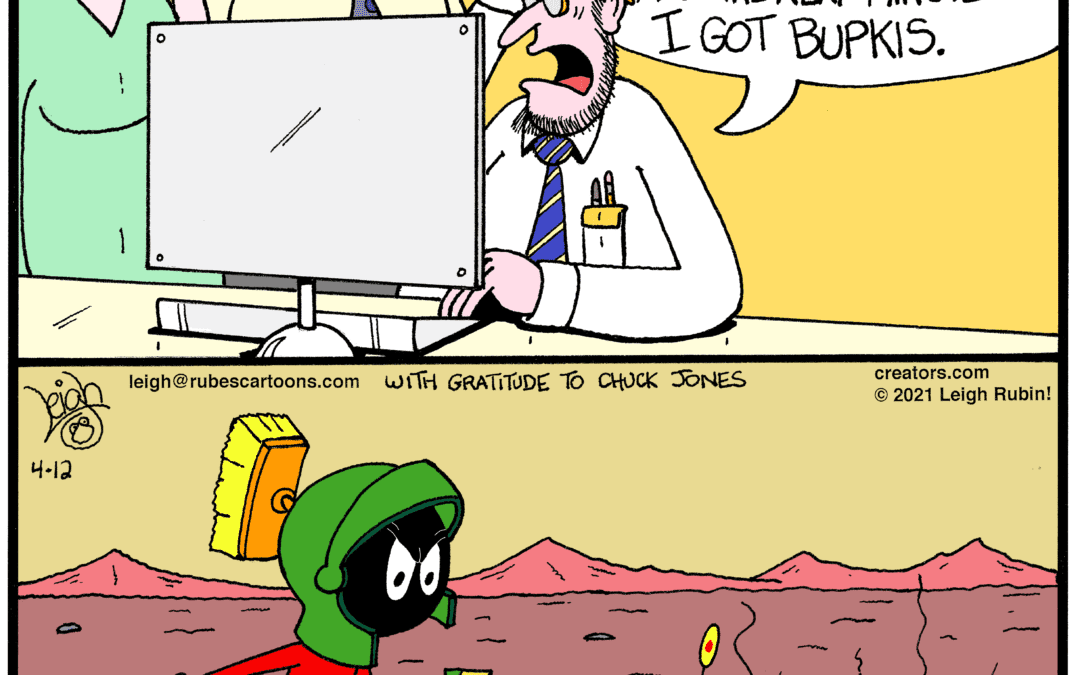 Looking for a laugh? Please join us for our next Creativeside Chat with acclaimed comic strip creator/author, Leigh Rubin on Thursday, April 8, 2021. Ben Olson will host this event as they chat about the creative process that joins images and words to make these clever, often hilarious, Rubes cartoons (scroll down for details and event link).  Stay tuned for special art for this event!

“Maybe you could call me a sit-down comedian.  All I need is a pen, some paper and an overactive imagination and I’ve got myself the world’s cheapest time machine.  Whatever you call it, I’m just gratified I have the opportunity to make people laugh.”  – Leigh Rubin

Talking cows, less-than-bright kids and multiple varieties of flora and fauna make their appearance in the witty offbeat cartoon panel, Rubes® by Leigh Rubin.  Rubin’s hilarious cast of characters and absurd view of the world have made Rubes® a favorite with readers everywhere.

The cartoon was inspired by a trip through a pharmacy, where Rubin was surrounded by a collection of greeting cards with zany images.  “It was 1978, and I was walking through the card section,” Rubin said.  “I just stopped in my tracks, looked at the cards and thought, ‘Wait a minute. I can do that.’”

And he did.  Rubin took his first steps on the path to cartoon success by creating a publishing company and distributing his own greeting cards.  Rubes Publications, established in 1979, also published the popular Notable Quotes in 1981.

Rubes®, in the form that cartoon aficionados now know it, began appearing in newspapers in 1984.  Today the panel is in hundreds of newspapers across the country and graces millions of greeting cards, mugs and t-shirts.  Rubin is the author of ten books including Rubes Bible Cartoons and the award-winning Rubes-Then and Now.  The first paperback of Rubes® was published in 1988 by G.P. Putnam & Sons.  Bowtie Press published the latest collection, The Wild Life of Pets, in 2003.

Linda Jones Enterprises is pleased to publish and represent the limited edition giclées and unique artwork of Leigh Rubin.