That’s how we cats…. survive! 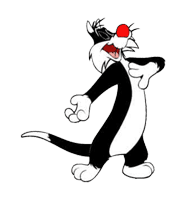 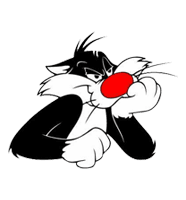 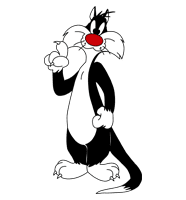 Who is Sylvester? Sylvester J. Pussycat, Sr or simply Sylvester, is a fictional character, a three-time Academy Award-winning anthropomorphic Tuxedo cat in the Looney Tunes and Merrie Melodies repertory, often chasing Tweety Bird, Speedy Gonzales, or Hippety Hopper. The name “Sylvester” is a play on Felis silvestris, the scientific name for the wild cat species (domestic cats like Sylvester, though, are actually Felis catus). The character debuted in Friz Freleng’s Life With Feathers (1945). Sylvester appeared in 103 cartoons in the golden age, and he was #33 on TV Guide’s list of top 50 best cartoon characters, together with Tweety.

If you are looking for quick and dirty details about our friendly cartoon character Sylvester, then look no futher. Check out the quick details below:

Among the lavish supply of kittens that graced our manse were three whom my father immediately recognized as having learning potential. In his quaint way he named the white kitten Othello, the black kitten, Desdemona, and the odd kitten–a tortois-shell roan–Iago. Iago later had kittens, sired by Desdemona. Othello couldn’t have had less interest in the whole matter, at least at that time, and was content with the ménage à trois just as it was. He became a wonderful kitten-sitter too, whenever the others were out rousting.

Just as Johnson, our intern cat of my early childhood, taught me that only in differences can we determine individual personality (Johnson swam in the ocean and relished grapefruit over all foodstuffs), so Othello, the seemingly content and most domesticated of cats vividly demonstrated once again that you simply cannot trust appearances. Othello was the only cat I ever knew to discover sex, consummate a lifetime of sexual experience, and reject sex all in one memorable night. Just what triggered his sudden and frantic devotion to this new hobby is hard to establish.

But the love bug that mysteriously struck Othello that night changed everything. He came out of his docile nap with an unbelievably evil yell and tore furiously around the perimeter of his hooked rug with the keening roar of Ferrari-like gear changes, until centrifugal force shot him like a comet through a set of French windows, fortunately open to the summer night. Across the porch he flung himself, through an arbor of Cecil Bruner roses, then, wearing a small but stylish bonnet of tiny pink roses, he careened off in a wild and gallant effort to seduce the world. – Chuck Jones 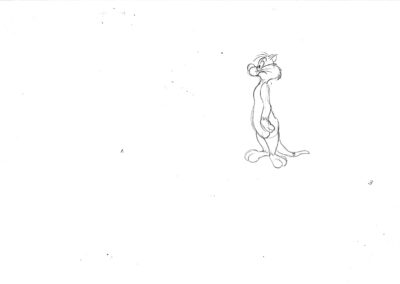 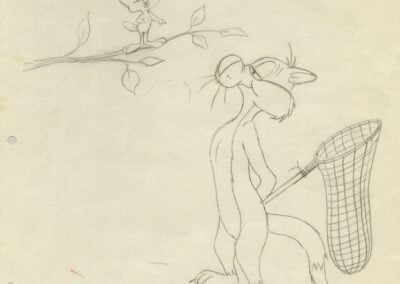 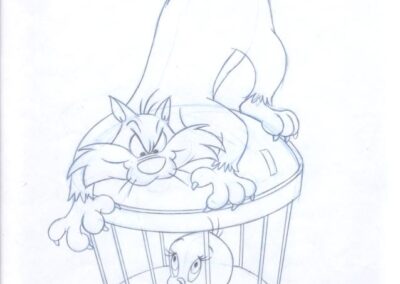 You read that correct! If you are a collector and you love Sylvester, you can find the best orignal and certified art work to hang on your favorite character wall! Look at all the options below and as always, ask us any questions!

We know you love Sylvester! We can’t live without him! That is why you want to grab your favorite hat, apparel, cup, and more at the Amazon store dedicated to our friendly cat character Sylvester!

If you are looking for Sylvester images that are special to us, then look at our Sylvester image collection below. Let us know if you have any favorites you would like to share! 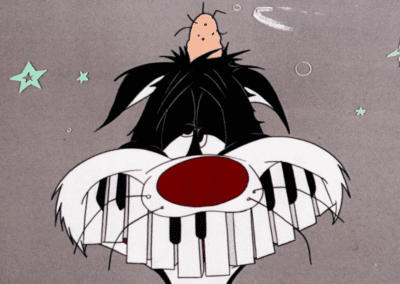 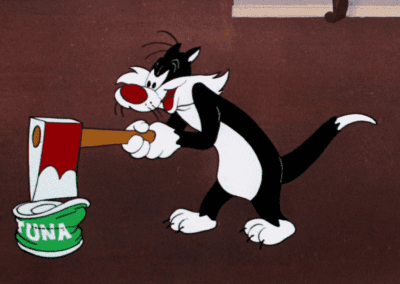 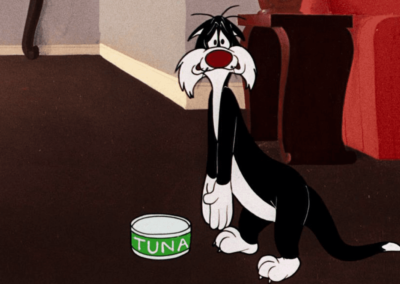 Getting Sylvester to your screen at home is as easy as signing up! Click the image below to get started on the funnest plan for you and your kids (and grandkids) to enjoy Sylvester at his best! You will be laughing all day long with the things he says that get stuck in your head. Click below to have super fun: